A look back at OroVibe Europe 2022

On October 6th, the 2022 edition of OroVibe Europe was held, the annual high mass organised by our partner editor of the Oro solution.

The aim of the event is to bring together the Oro community to share perspectives, innovations and feedback on B2B e-commerce.
Of course, Smile, as a historical partner, was Gold Sponsor of the event. 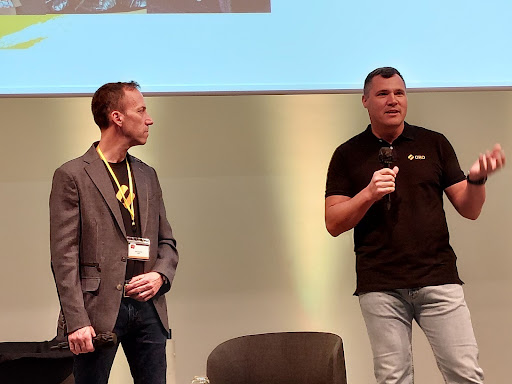 Yoav Kutner, Dima Soroka and Laurent Desprez (not in this photo) opened the day with an informative keynote that set the tone for the day. 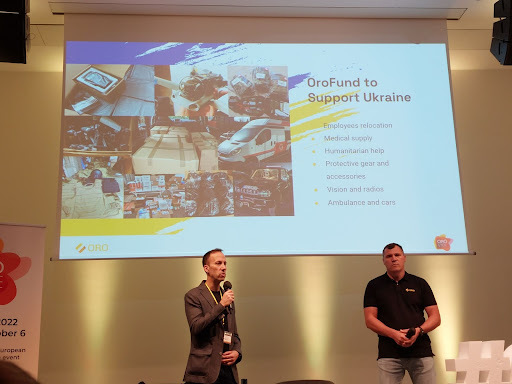 Yoav Kutner, CEO of Oro, spoke about the company's presence in Ukraine, where it employs over 100 people. Since then, Oro has carried out numerous actions to support its employees and the Ukrainian population. Yoav admits that he was surprised by the extraordinary resilience of his Ukrainian teams despite the invasion of part of the country by the Russian army, which we also see in our 320 Ukrainian Smile employees (Editor's note: Smile also created an association after the invasion to support its employees based in Ukraine: Smile Ukraine Solidarity) 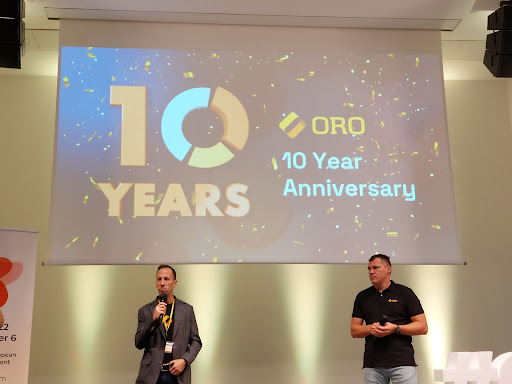 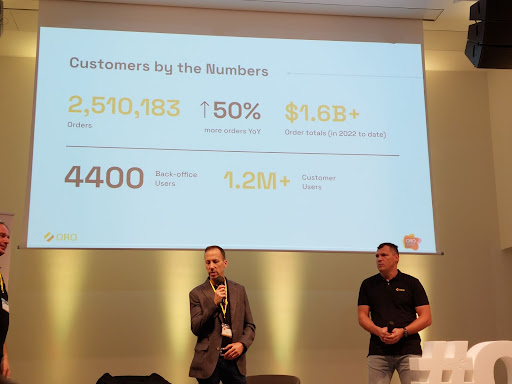 Oro shares some figures on the activity around OroCommerce which testify to the vitality of the solution launched almost 6 years ago, with +2.5M orders placed via its platform.
Since its launch in 2017, OroCommerce has had a flawless track record and is notably present in the Gartner magic quadrant for B2B e-commerce solutions.

The OroCommerce roadmap in detail

Every year Oro releases a new LTS version, usually around March. This year the new version will be numbered 5.1 and will contain technical improvements, a new search engine, and the sale of products by kit / bundle.
The B2B marketplace functionality will also be improved. Each seller will now be associated to an "organization" in the OroCommerce back-office in order to restrict the seller's vision to his own activity. This is in order to give more importance to the organisation functionality which is currently underused. However, this will not prevent the maketplace operator from having a vision of the activity of the sellers because there will also be an organization that will allow the operator to have a global vision. 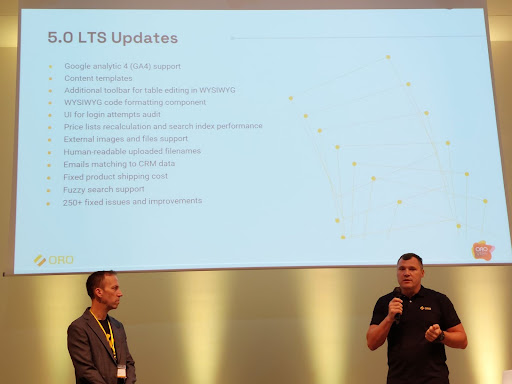 The current version 5.0 has been updated several times since its release in February 2022, not only for patches, but also to bring many functional improvements. For example, compatibility with Google Analytics 4 was added last July. As Google has announced that it will deactivate Universal Analytics as of 1 July 2023, those who use it must switch to Google Analytics 4 to continue acquiring and analysing traffic data.

François Duranton, CEO of the consulting firm ZeTrace, shares some thoughts on the market outlook. 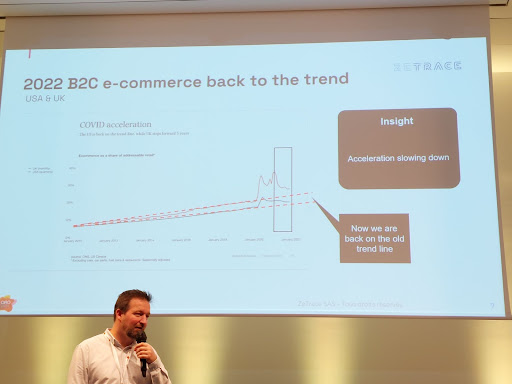 François analyses the effects of the Covid-19 crisis with figures. The health measures pushed B2C consumers to temporarily increase their purchases on the internet. In the UK, this acted as an accelerator of the digitalisation of the economy, as after the lifting of the health restrictions sales volumes stabilised at a level above the pre-Covid trend, suggesting a lasting change in consumer purchasing habits. In the US, on the other hand, internet sales volumes have fallen back to the pre-covid trend. Thus, the health crisis has not had the same effects on consumer behaviour in the different countries. 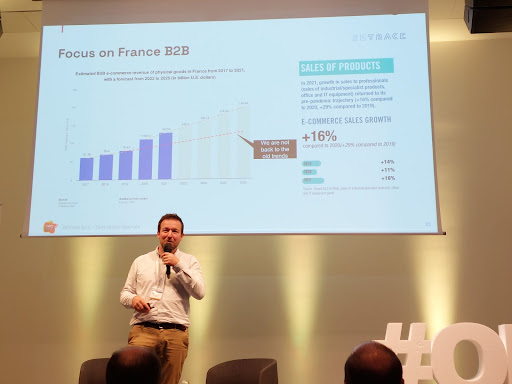 Oro has recently added native marketplace functionalities, which makes it possible to launch a B2B marketplace more quickly and at lower cost.
According to François Duranton, the B2B marketplace model will be increasingly successful, particularly for purchases of C-type products, which are non-recurring and non-strategic purchases (furniture, office supplies, small tools, consumables, etc.). These purchases are one-off and not very predictable in nature, and this seems to fit in well with the marketplace model, in which there is little attachment to the seller and competition is stimulated to bring prices down naturally. 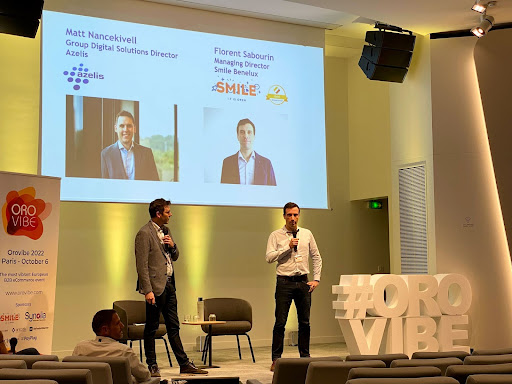 Matt Nancekivell from Azelis, and Florent Sabourin from Smile, give us their feedback on the implementation of OroCommerce and the digitalisation of B2B activity. They gave us a live presentation of the key success points to be worked on to successfully launch an OroCommerce project:

Other testimonies came to complete the day, such as that of Agro Service 2000 which shared the reasons why they chose OroCommerce. Among these, we noted that the functional richness, cost, and flexibility of the e-commerce platform convinced them that Oro could help them address new markets and new product lines in the future. 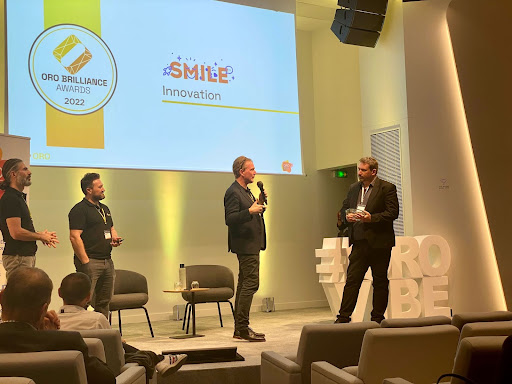 To end the day on an undeniably positive note, further anchoring the historic and creative partnership between Smile and Oro, Smile received an innovation award for the second year running! 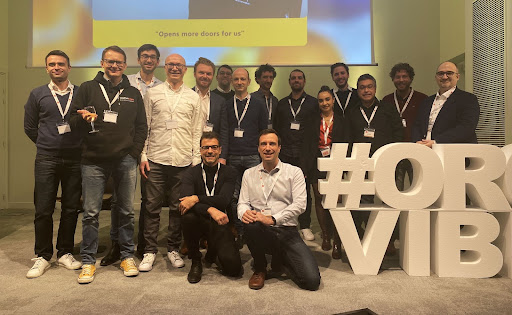 The Smile team came in great numbers for this edition with participants coming from three countries: France, Germany and the Netherlands! See you next year and see you soon, Oro!

Comments on "A look back at OroVibe Europe 2022"

By business and solution

BECOME A SMILIAN, JOIN US!

JOIN SMILE AND DISCOVER AN OPEN ENVIRONMENT
Exclusively Open Source technologies
At Smile, we like to work with passionate people who take the initiative and who have a sense of doing a good job.